Royal Caribbean Cruises has just announced that its “megaliner” Voyager of the Seas will be based in Asia and Australasia from 2012 – including a five month season based in Sydney from November 2012.

The 3840-passenger vessel will also cruise in China between June and October 2012, and will be the fifth Royal Caribbean Cruises Limited ship sailing in the region in 2012/13 – alongside Rhapsody of the Seas, Radiance of the Seas, Celebrity Solstice and Celebrity Millennium. 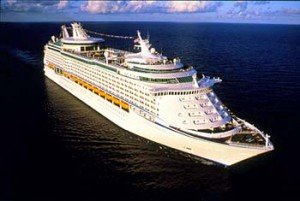 “There are clear opportunities in the China and Australia markets, which are key areas for Royal Caribbean International’s global development,” said CEO Adam Goldstein at a press conference in Shanghai.

Royal Caribbean Australia MD Gavin Smith said the positioning of Voyager down under “demonstrates our company’s tremendous belief in the future of this region and we are extremely honoured to shape the future of cruising in Australia”.

Voyager of the Seas has 1556 staterooms and will introduce a host of innovations including its ‘Royal Promenade’ indoor main street, an ice rink, skating track, golf simulator and inside cabins with a view.

She will operate 12 New Zealand, South Pacific and Australian itineraries ranging from one to 18 nights, sailing from Sydney and Fremantle.

Royal Caribbean said the cruises were due to open for sale early next month.